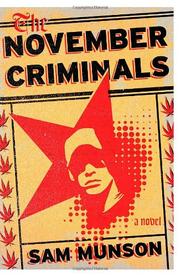 High-school student with dreams of collegiate glory investigates the murder of a classmate.

Debut novelist Munson combines a classic sense of adolescent alienation and a keen comedic voice to depict a bleakly funny teenage wasteland in the wilds of the District of Columbia. The book is structured around the college essay question of one Addison Schacht, a smart 18-year-old high-school senior who supplements the dreary monotony of life in an upper-middle-class D.C. suburb with a sideline selling marijuana to his equally well-off classmates. But Addison fully intends to surpass his peers with a meteoric rise to academic greatness—as a classics major, no less. His only real comrade in his delusional struggle is best friend and soul mate Phoebe “Digger” Zeleny, a funny, sly young woman Addison repeatedly declares is not his girlfriend by any stretch of the imagination. The crime to which our hero devotes himself is the startling death of his classmate Kevin Broadus, gunned down in a coffee shop near the Potomac. Two others were also killed, but the murderer took the time to pump a dozen bullets into Kevin. “You had to figure all the extra bullets…meant something,” Addison says.

Echoes of James Fuerst’s Huge (2009) and the 2005 film Brick abound, but deft comic timing and a caustic, ambitious protagonist make this a perfectly valid entry in the teen noir subgenre.