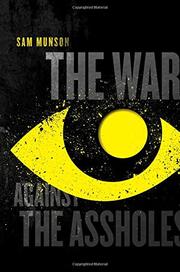 THE WAR AGAINST THE ASSHOLES

Some teenagers joy ride; some join gangs; some do drugs; and some, apparently, do magic.

For hundreds of years, the powerful magicians who use wands and other tools (the “assholes” of the title) have repressed the much smaller group who perform magic with will alone. Michael Wood is a somewhat thuggish teen who might possibly have a decent heart and brain buried beneath his hormonal and violent impulses. When his odd classmate Hob Callahan introduces him to the magical minority and their struggle with the assholes, Michael signs on with barely a second thought. The conflict doesn’t really surface in the present day until Hob and his pals steal a number of magical objects, prompting a brutal campaign of retaliation. The philosophical difference between the two cabals seems to be couched as a form of class warfare, but that doesn’t hold up under scrutiny. True, the assholes are based at a snooty prep school, but their adversaries consist of two wealthy adults and a few kids living in pricey New York City apartments, some of whom attend a Catholic school with tuition of $30,000 a year. There’s even a mix of racial and religious backgrounds on both sides. The war’s antecedents are steeped in high tragedy, but the modern conflict feels petty. It’s hard to tell whether Michael and his companions have any true sense of allegiance to a higher cause, and his crush, Alabama, is as happy to recklessly use a gun as to employ magic to commit mayhem. Perhaps the behavior (and the annoyingly choppy sentence fragments of Michael’s first-person narration) is meant to serve as an insight into the chaotic nature of the teenage mind, set against the occasionally beautifully described, hallucinatory milieu of the magical world, but it all seems pointless.

Is Munson’s second novel (The November Criminals, 2010) an unsatisfyingly resolved stand-alone or the prelude to a larger series? It doesn't really matter.