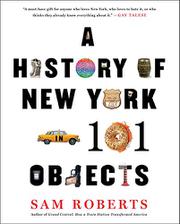 A HISTORY OF NEW YORK IN 101 OBJECTS

New York Times urban affairs correspondent Roberts (Grand Central: How a Train Station Transformed America, 2013, etc.) offers another installment in the recent spate of "a history of x in x objects" books, this one an expansion of a popular feature he created for his newspaper. Such endeavors are inevitably superficial; it is impossible to adequately present the history of anything through a few dozen objects without committing vast sins of omission. The best that can be expected is some illuminating glimpses of that history as revealed by objects left behind—which is, after all, one of the major purposes of museums. This book might best be viewed as a portable virtual museum. Since it is virtual, it can contain small items (a black and white cookie), very large ones (the Cross Bronx Expressway) and an item that probably no longer exists (the baseball from the "shot heard 'round the world" in 1951). The author explains that the 101 choices, while "highly subjective…had to have played some transformative role in New York City's history or they had to be emblematic of some historic transformation. They also had to be enduring, which meant they could not be disproportionately tailored to recent memory or contemporary nostalgia”—though 60 of the selections are post-1900. Still, Roberts delivers an entertaining stroll through the history of one of the world's great cities. Each item is illustrated with a photograph, most in color, and described in two or three pages of sprightly text. While some selections are necessarily obvious—the Times Square New Year's Eve ball, for example—most are delightfully surprising, from the city's iconic rooftop water tanks to Rosie Ruiz's New York Marathon certificate.

It's not scholarly, but it certainly is fun. Recommended for even casual fans of Big Apple history and culture.