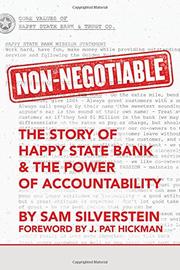 The Story of Happy State Bank & The Power of Accountability

A practical business guide that advocates a correlation between success and integrity.

Author Silverstein (No More Excuses, 2015) has devoted his career to building successful corporate cultures centered around the principle of accountability—his previous works are all attempts to catalog and systematize his life’s labor. In his latest book, he documents the extraordinary success of the Happy State Bank, headquartered in a tiny town called Happy in the Texas Panhandle. The work is the result of interviews he conducted with the bank’s CEO, J. Pat Hickman, who attributes its success—even during the recent dark days for banking—to a belief system built around what he calls “non-negotiables,” basic moral principles unconditionally held. “Some people use the word belief as though it’s a moving target,” says Silverstein. “I believe that hidden deep within the deepest meaning of the word belief are the words conviction, trust, and faith. That kind of belief means you don’t sway when something or someone pulls at you.” Rather than merely moral prohibitions, Hickman interprets nonnegotiables as instruments of greater control and freedom, premised upon a reflection on which parts of life can be mastered and which are matters of chance. For all its inspirational rhetoric, the book maintains a healthy pragmatism regarding its message: “You can’t have a non-negotiable for something you can’t control.” The underlying moral of Silverstein’s examination is that an uncompromisable moral worldview is necessary to achieve true accountability and is, therefore, an indispensable ingredient in prosperity. The culmination of the work is the list of Hickman’s own nonnegotiables, some of which might be too vague to be all that helpful (“Do what’s right”), while others seem especially timely in an age of notorious malfeasance (“Don’t forget that it’s other people’s money”). Silverstein’s writing is clear and straightforward, making this both an accessible and actionable book.

Especially following a historic banking crisis, this is a timely lesson on the importance and commercial value of ethical commitment.