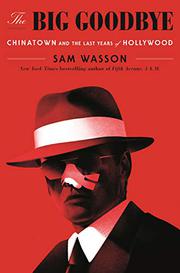 Chinatown and the Last Years of Hollywood

A biography of the making of Chinatown, which scriptwriter Robert Towne called “a state of mind.”

In his latest, Los Angeles–based film chronicler Wasson (Improv Nation: How We Made a Great American Art, 2017, etc.), who has written about Bob Fosse, Audrey Hepburn, Blake Edwards, and Paul Mazursky, undertakes a multifaceted dissection of the infamous noir film starring Jack Nicholson. Produced by Robert Evans and written by Towne, Chinatown was directed by the “brilliant tyrant” Roman Polanski. Throughout the book, Wasson treats the film as a masterpiece, an arguable but reasonable assessment, and delineates his biographies of Nicholson, Evans, Towne, and Polanski in the context of the film specifically. The author adeptly illustrates how each man brought his own experience of contemporary Hollywood to the film though the story is arguably a more accurate depiction of 1930s Hollywood than any noir film recorded in that time period. Wasson portrays drugs and crime in a matter-of-fact manner befitting the movie itself, and he doesn’t minimize or romanticize any of the less-than-savory elements involving the principals of the narrative; this applies especially to Polanski. The author weaves into the text details about the Tate-LaBianca murders and their effects on not only Polanski, but the city as a whole. He shows how the phrase “That’s Chinatown” was not just a memorable motif in the movie, but also a reflection of the visceral emotions roiling LA at the time of the film’s release. “Since the murders,” writes the author, “the communal dream of social and political reformation that had illumed the sixties had blackened, almost on cue, at the decade’s turn.” As Towne said, “there are some crimes for which you get punished, and there are some crimes that our society isn’t equipped to punish, and so we reward the criminals.” Through Wasson’s thorough research, this book clearly illuminates that concept.

If you love Chinatown, then you’ll love The Big Goodbye—and it’s good reading for any American cinema buff.