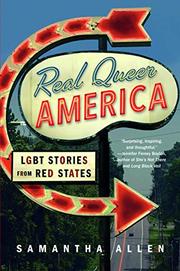 In a cross-country journey, a transgender reporter revisits red-state locations from her past.

In 1989, before the United States was quite as divisively separated into red and blue states, reporter Neil Miller traveled across the country interviewing men and women living openly gay lives in settings outside of the usual urban gay meccas. The resulting book, In Search of Gay America, is a clear precursor for the present volume by Allen (Love & Estrogen, 2018), a GLAAD Award–winning journalist who covers LGBT issues for the Daily Beast. Despite some progress over the last several years, discrimination and human rights violations continue to plague the LGBT community, particularly in rural regions within red states. The author traveled from Provo, Utah, where she attended Brigham Young University, to locations in Texas, Bloomington, Indiana, where she met her wife at the Kinsey Institute, as well as Tennessee and other spots in the South. Along the way, she reacquainted herself with friends and mentors from her past or recent social media contacts, many of whom are also transgender. Readers old enough to recall the memorable profiles captured in Miller’s book might expect a similar approach here, at least based on the book’s summary and the author’s journalist credentials. However, Allen tells a more personal story relating to her own transformational experience, which, while often instructive, pulls attention away from the fascinating individuals she encountered on her trip. Though she generously acknowledges the strong work they are doing within their communities and sheds meaningful light on the progress achieved within these red-state regions, she doesn’t allow their portraits to come into clear focus; all too often their stories revert back to her. By the end of the book, few of these folks will be memorable for readers.

While expanding awareness on the efforts being made in the LGBT community within red states, this journey feels somewhat perfunctory, and the narrative rarely sustains the promise shown in the opening chapters.