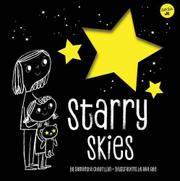 Learn About the Constellations Above Us

Young earthlings turn starry skies into playscapes in this first look at constellations.

On a page first glimpsed through a big die-cut hole in the front cover, Chagollan promises that stars “tell a thousand stories.” She goes on to describe brief scenarios in which residents of Earth interact with 15 Northern Hemisphere constellations. These range from Benjamin’s battle with a fierce dragon beneath Draco to a trio of unnamed ducklings who use the Swan to “find their way home.” Six further starry clusters bearing only labels are crowded into the final spread. In illustrations composed of thin white lines on matte black backgrounds (the characters formed by the stars are glossy), Aye colors significant stars yellow, connects them with dots, and encloses them in outlines of mythological figures that are as simply drawn as the animals and humans (and mermaid) below. As a practical introduction, this has little to offer budding sky watchers beyond a limited set of constellations—two, the Big Dipper and the Summer Triangle, are not official constellations at all but classified as asterisms—that are inconsistently labeled in Latin or English or both. Despite a closing invitation to go out and “find these stars in the sky,” the book provides no sky maps or verbal guidelines that would make that actually possible.

A promising approach—but too underpowered to reach orbital velocity.