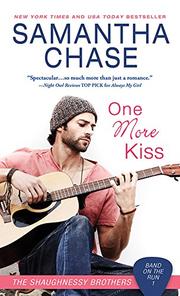 When rock star Matt Reed is hounded and ridiculed by the press, causing him to question his talent and his future, he takes refuge at his childhood best friend’s house, in the hometown he swore he’d never go back to, and winds up in love with his friend's younger sister, Vivienne.

On the night the hugely successful band Shaughnessy plays its last concert before a well-earned hiatus, lead guitarist Matt starts drinking early, which helps him forget that Vivienne Forrester showed up in his dressing room and that they shared a sizzling kiss before his manager dragged them apart and had security throw her out. Two years later, Matt is humiliated when a Broadway show he headlined closes practically before it begins. Not ready to face a hostile press corps, Matt accepts his friend Aaron’s invitation to hide out at his house in North Carolina; it was an easy decision since Aaron travels a lot and Matt won’t feel like he's underfoot. When he arrives, he learns that Vivienne is preparing to move into the property’s guest cottage—which she’s built into her dream home to support her career as a food blogger and online magazine editor—but is surprised by her frosty attitude. Helping her move into the cottage and then working with her on a food-based project throws Matt together with her often, and their obvious attraction flares up again, leading to another kiss, reminding him of the first one two years ago. Vivienne and Matt each have family issues to work through, complicated by a disapproving Aaron. Chase spins off her popular Shaughnessy Brothers (This Is Our Song, 2016, etc.) series to explore the wounded Shaughnessy band members, starting with Matt and a story that’s sweet, generally satisfying, and relatively chaste for contemporary romance. However, much of the action is mundane, the linear storytelling blunts the emotional intensity, and the characters’ lack of communication gets irritating.

Unexceptional but appealing, especially to readers looking for less sex in their contemporary romance.