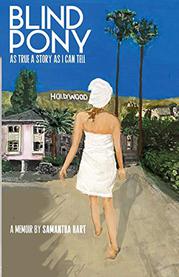 As True a Story as I Can Tell

A debut memoir tells the story of a teenager trying to escape a life of exploitation and find herself.

Hart’s troubles started when she was 5 years old. Her mother had left her husband, taking her five daughters to live on her parents’ farm in rural Pennsylvania. According to Hart, her grandfather sexually abused her repeatedly, trying to hide the horrific deeds from the rest of the family. He was caught in the act by the author’s mother, who ignored it. Hart decided she would have to fend for herself and headed to Arizona to live with her father, “Wild Bill,” whom she had idealized in his absence. But he had started a new family, and Hart would not be a part of it. The cycle of abuse continued as she fled Arizona for Los Angeles after a pimp tried to recruit her. She found herself hooked on drugs and abused by a string of men trying to keep her as a sex object. But along the way, she discovered assets and talents. Eventually, she realized she had inherited her father’s ability to bluff his way through sales and that she was good at prepping a store for presentations. She did some modeling, and that led her to different jobs as a stylist for adult photo shoots. Hart followed a photographer named Eugene to England and wound up traveling around Europe, selling adult photo sets to publishers. At one point, she became a backgammon hustler in Los Angeles, something readers likely won’t find in many memoirs. Most of this happened before she turned 20. What pulls the story along is that each time the exploitation cycle repeated, Hart seemed to get a little closer to relying on her own strengths and finally becoming independent. The drugs, the lure of glamour, and just bad decision-making kept getting in the way. Hart is a gifted storyteller, and sometimes these engaging tales of traveling the world and mingling with the rich and famous seem like something out of a celebrity biopic (perhaps why she subtitled her work). The book is ultimately inspirational, but readers have to see the author go through a wringer to get there.

A harrowing and engrossing account of a young woman’s difficult journey.