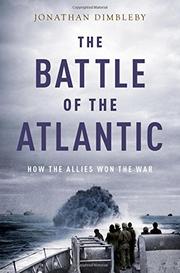 THE BATTLE OF THE ATLANTIC

A fine account of the brutal sea campaign against Nazi Germany, from writer and broadcaster Dimbleby (Destiny in the Desert: The Road to El Alamein, 2013, etc.).

On Sept. 3, 1939, hours after hostilities began, a U-boat torpedoed the liner Athenia about 200 miles off the coast of Ireland. With the benefit of hindsight, historians proclaim the event’s significance (“the sinking revealed in a single blow how unready Britain was for a conflict in which the U-boat would become Germany’s principal weapon against Allied merchant shipping”), but no contemporary leader got the message. Despite his prescience on Hitler, once Churchill took office, his strategy was mostly wrong. As First Lord of the Admiralty in 1939, he maintained that Germany’s surface fleet was its greatest threat. As Prime Minister in 1940, he shared the universal delusion that air power held the key. Fortunately, Hitler shared this fantasy. By April 1940, the handful of U-boats on patrol sank nearly 250 ships. Churchill was worried, but Britain was slow to enforce a convoy system and remained short of escorts. Air force chiefs stubbornly refused to assign long-range bombers for anti-submarine patrol. Germany’s decoding of British naval ciphers was far superior to its vaunted British Enigma counterparts, and U-boat production was increasing. Consequently, sinkings rose alarmingly for three years before the Allies got their act together. The turning point was April 1943, when the air forces finally coughed up a fleet of long-range bombers. Later, Churchill wrote that the U-boat sinkings were “the only thing that ever really frightened me during the war.”

Recent historians such as Clay Blair emphasize that the Allied supply line was never seriously in jeopardy, but Dimbleby sticks to the traditional cliffhanger version, delivering a gripping history overflowing with anecdotes and enough calamity, misery, explosions, and individual valor for a Hollywood disaster epic.

AT ALL COSTS
by Sam Moses
Nonfiction