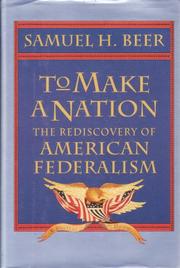 TO MAKE A NATION

Harvard government professor Beer traces the evolution of American federalism and, with scholary zeal, reilluminates the eternal state-vs.-central-government debate. The Constitution, according to Beer, ``displays much blank space,'' and, to understand it, it's necessary to look at the tradition behind it. Beer has a threefold aim here: to trace the intellectual evolution that sought to sweep away the ``dark ribaldry of hereditary, indefeasible right,'' in John Adams's phrase; to look at American federalism in light of the ideas behind the failed English Commonwealth of the 17th century; and to examine federalist ideas in terms of the challenges to them over the past two centuries. Beer offers lengthy discussions of the usual suspects, from Madison, whose Federalist Papers are a cohesive statement of the philosophy he favored, to Montesquieu, who felt that popular government was unworkable in a diverse and fragmented country. But the author also enlists Milton, whose Areopagitica championed free speech and who envisioned a government by discussion rather than by fiat, and little-known writers such as James Harrington and James Wilson. The author is an expert on English politics, and his sections on such thinkers as Harrington, whose vision of federalism was a precursor to the American version in that he argued that government derives authority from the will of the people, are especially good. And Beer's discussion of the debate over federalism in this country is a valuable summation of a seemingly almost medieval doctrinal wrangle. Beer's fresh approach sometimes grades into obscurity, but, still, this is an erudite and forceful work, packed with the scholarship of a lifetime.