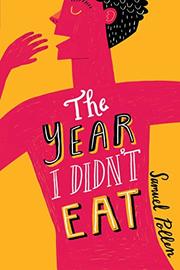 THE YEAR I DIDN'T EAT

Max Howarth is a 14-year-old high schooler with anorexia nervosa.

Max lives in a small town in the west of England with his parents and his 21-year-old brother, Robin, an enthusiastic outdoorsman. About a year ago Max developed anorexia. His parents aren’t sure how to help, but Robin cracks jokes and smooths over awkward situations. Robin also introduces Max to geocaching at Christmas, when the story opens. Max’s two friends, Stu and Ram, know nothing about his anorexia because Max doesn’t think they could possibly understand. He isn’t honest with his therapist either, instead writing letters (interspersed throughout) in his secret journal to “Ana” (short for anorexia), telling “her” how she makes him feel. When his mother finds his journal, a terrified Max hides it in his geocache. When he returns for it he finds it’s no longer there. In its place is a letter of personal confessions from “E,” who he believes is Evie, the new girl at school. But is it? Pollen writes from the inside about anorexia, effectively communicating the feelings, obsessions, and difficulties Max experiences and making it clear that it is an equal-opportunity disorder. Ana’s scornful voice frequently breaks into Max’s narration, a device that combines with his meticulous calorie counting to place readers in his head. The book is default white, with nonwhite ethnicity primarily conveyed through naming convention; Ram is Muslim. A concluding author’s note provides encouragement.

Readers will appreciate the raw and real portrayal of anorexia from a group often left out of the conversation.