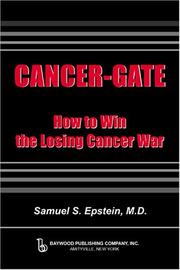 How to Win the Losing Cancer War

An astute—and sadly revealing—collection of articles from the past 15 years covering a wide number of topics related to the state of cancer research in the United States.

While it's true that Epstein—a physician and professor of occupational and environmental medicine at the University of Illinois College of Medicine—is clearly distressed by the current situation regarding our nation's approach to seeking cures and causes of cancer, this is far from a screed or conspiracy theory. He and a small number of contributors explain clearly why they feel the cancer fight has been stymied from the beginning. Epstein suggests the elimination of two impediments immediately: blaming the victim and putting the emphasis on diagnosis and treatment instead of prevention. He further suggests that there ought to be a distance between research institutions and those who fund the research. Since that likely means state intervention, he would like to see that ideologically biased individuals are not put in positions of power, dispersing funds (as happened under the Reagan administration, with its closed-door sessions with industry executives); too often the economic and political strings are held by those with a conflict of interest, such as the makers of products with suspicions of carcinogenic properties, or those with a vested interest in selling drugs to cancer patients. He also suggests that groups like the American Cancer Society stop spending three-quarters of their massive annual outlay on administrative costs, and start working more closely with environmental and occupational groups. Finally, he addresses the potential threats from pre-menopausal mammography, and the food industry's use of growth hormones.

There's a clear and intelligent gadfly at work here, offering much food for thought through his outrage.