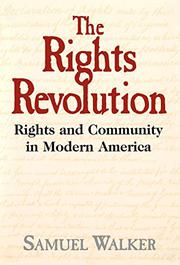 Rights and Community in Modern America

A simultaneously perceptive and myopic defense of rights. After agreeing that there has been a revolutionary expansion of individual rights during the last half of this century, Walker (In Defense of American Liberties: A Hiostry of the ACLU, 1990, etc.) mounts a defense of these rights against critics from both ends of the political spectrum. Conservatives complain that morality has been undermined by incessant claims of victimization, leaving us with a self-centered society where no one will take responsibility for themselves. Communitarians complain that claims of individual freedom have crowded out community values, leaving us with no basis for a shared life. Walker doesn—t deny the existence of problems, but maintains that the expansion of individual rights represents progress in honestly confronting them. He insists that we look at the past without rose-tinted glasses and recognize that claims by women, for example, are responses to historical denials of full membership in the American community. Building on the proposition that membership is the first and most essential element of any community, Walker credits the expansion of rights with making the American community more inclusive. For feminists to cast the First Amendment as the enemy of women’s rights due to concerns about pornography, then, reflects “an astonishing example of historical amnesia.” This strong case against critics of rights is weakened by Walker’s reluctance to move outside the arena of law and the judiciary, however. Of course, rights have a logical, even overriding significance within a legal and constitutional system built around the status of the individual. But how are positive decisions about the community’s welfare to be made without a common ground beyond individual rights? Limiting his discussion to legal protections without considering the problems of political action allows Walker to feel very good about rights but also reduces a potentially powerful analysis to a near polemic.