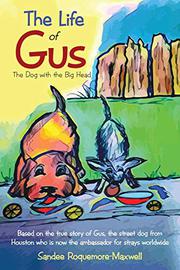 THE LIFE OF GUS

Based on a true story, this debut chapter book tells one abandoned pooch’s story through his own eyes.

Gus wasn’t always a stray dog. When he was young, his name was Rex and he loved his human, Timmy, very much. But things started to change for Rex when Timmy went to school and didn’t have time for the canine he once loved. After escaping the backyard to follow Timmy to a friend’s house, Rex was punished. Timmy knotted shoelaces together and tied Rex to a tree, abandoning the dog, first by ignoring him and then neglecting to feed him during the cold winter months. When his family moved, Timmy left Rex tied to the tree. Rex eventually broke free and became a street dog, desperately lonely until he met fellow stray Trixie. The two wished they could trust humans, but further cruelty—some boys fired a pellet gun at Rex—caused them to hide. Unfortunately, Rex’s health was failing; the shoelace still tied around his neck was making him sicker. He discovered it was hard to breathe and swallow. Luckily, kind strangers took him in, healed him, and made him a TV and internet star. Now named Gus, he and Trixie wait for their forever homes. In her simply worded, dog’s-eye-view narration, Roquemore-Maxwell doesn’t pull any punches when describing the brutality of humans. But the canine’s harsh reality is made bearable through his hopeful, loving worldview. His rescuers also bring light into the darkness that stray dogs face, and the author’s absorbing and moving story may inspire young readers to become motivated and tackle these problems. The images by debut illustrator Bordelon are sparsely spread throughout. They are more successful on the color cover than in the black-and-white line work, as the cartoonish style doesn’t match the seriousness of the content.

Young independent readers’ hearts will go out to the rescue dog in this engaging tale.