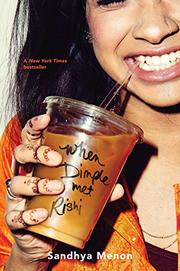 A clash of perspectives sparks this romantic comedy about two first-generation Indian-American teens whose parents set an arranged-marriage plan in motion, but it backfires big time—or maybe not?

In the alternating voices of her two protagonists, Menon explores themes of culture and identity with insight and warmth. Seamlessly integrating Hindi language, she deftly captures the personalities of two seemingly opposite 18-year-olds from different parts of California and also from very different places regarding life choices and expectations. Insomnia Con, a competitive six-week summer program at San Francisco State focused on app development, is where this compelling, cinematic, and sometimes-madcap narrative unfolds. Dimple Shah lives and breathes coding and has what she thinks is a winning and potentially lifesaving concept. She chafes under her mother’s preoccupation with the Ideal Indian Husband and wants to be respected for her intellect and talent. Rishi Patel believes in destiny, tradition, and the “rich fabric of history,” arriving in San Francisco with his great-grandmother’s ring in his pocket. He plans to study computer science and engineering at MIT. But what about his passion for comic-book art? They are assigned to work together and sparks fly, but Dimple holds back. Readers will be caught up as Rishi and Dimple navigate their ever changing, swoonworthy connection, which plays out as the app competition and complicated social scene intensify.