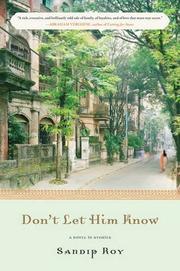 Roy’s mesmerizing debut explores the inner lives of a family of Indian immigrants who can never reveal their secrets.

Romola Mitra doesn’t tell her new husband, Avinash, what she found in a letter addressed to him. It’s too late for that—she’s already left Calcutta for the small Illinois town where Avinash is finishing his Ph.D. Romola now bottles a painful secret that seems destined to explode. Instead, it fizzles. Flashbacks to Romola’s hopeful youth in India contrast with quiet scenes of domesticity with Avinash and their son, Amit, all three forming a close-knit family without knowing each other at all. Avinash, whose first crush was on his male barber, has resorted to meeting men in anonymous chat rooms and gay clubs, while his wife daydreams about the film star she might have married had her parents approved. Amit grows up and moves to San Francisco without ever knowing the sacrifices his parents made. In refusing to buck the system, they challenge the very notion of freedom. In Calcutta, the Mitra family had servants; in the middle of America, Romola is confined to her box of an apartment with no car and not quite enough English to fully express herself. She and her extended family find freedom in transcendent moments. Forbidden to eat sweets, Amit’s great-grandmother hides jars of mango chutney under her mattress to have when she’s bedridden. Her recipe—and the tastes and smells it produces—follows Amit all the way to San Francisco years after she dies. Romola’s adventures are the most surreal, including a harrowing encounter with a McDonald’s cashier, a tussle with a bodyguard at a funeral and a singalong with a drag queen named Bang la Dish. For Avinash, what doesn’t happen is almost as important as what does: At times, his indiscretion leads him to heartache or danger, but it doesn’t ruin his life.

Instead, the truth becomes a canvas for a beautiful still-life portrait—and a masterpiece at that.