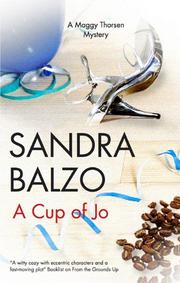 A CUP OF JO

Everything is ready for the grand reopening of Uncommon Grounds. Forced out of its Benson Plaza location when a snowstorm caved in the roof (Brewed, Crude and Tattooed, 2009), co-owners Maggy Thorsen and Sarah Kingston have been rebuilding at the Brookhills commuter train station, despite a series of construction mishaps. Now barista Amy Caprese has ordered biodegradable takeout cups, and Maggy’s asked prop man Kevin Williams to loft a five-foot inflatable coffee cup above her new digs. But the celebration, timed to coincide with the inauguration of a rail line connecting suburban Brookhills to Milwaukee, falls flatter than an oversteamed latte when party planner JoLynne Penn-Williams is found curled up in the giant mug, dead as vaudeville. Brookhills County Executive Brewster Hampton, on hand for the celebration, is shocked. So are his Milwaukee counterpart Wynona Counsel and his wife, rising entrepreneur Anita. But Jo’s sister Rebecca, glad the bitch is dead, accuses her of sleeping with both Rebecca’s boyfriend, Michael Inkel, and Maggy’s main squeeze, Sheriff Jake Pavlik. Looks like those cozy nights on the sofa sipping Shiraz and feeding indigestible pizza toppings to Maggy’s sheepdog Frank may be over—especially if Jake gets arrested for murder.

Like the Styrofoam cups banned by Amy, the murder in Balzo’s sixth is strictly disposable, its flimsiness in no way strengthened by her sexual innuendos and quips about canine flatulence.