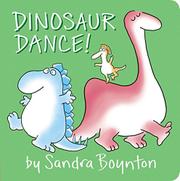 It's not the first time dinosaurs have been featured in a clever Boynton board book. It seems she—and we—can't get enough.

As her fans know, Boynton has a sly wit that respects the intelligence of her young fans and amuses the adults asked to “read it again.” In this book she introduces nine dinosaurs, each of which dances in a way that seems totally appropriate for that particular species. “The blue Stegosaurus goes SHIMMY SHIMMY SHAKE. / The red Brontosaurus goes QUIVERY QUAKE.” Drawing on her experience as a children’s musician, she writes a text that trips along like a song with rhymes that make sense but don't intrude. The illustrations, typical Boynton, reflect her greeting-card background. They are cartoonish but manage to capture the unique personality of each creature. The unnamed dinosaur narrator looks genuinely distraught at not being able to name the “tiny little dino” that “goes DEEDLY DEE.” Spoiler alert: the tiny little dinosaur is probably Compsognathus and would be about the size of a small chicken. Young dinophiles would be impressed if the dinosaurologists in their lives could supply that factoid, but alas, they will have to look it up.