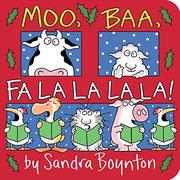 A bevy of barnyard animals, a cat, and some dogs get fully into the Christmas spirit by sprucing up the farm with colorful decorations, including holly berries and sparkling baubles. They have a great time and sing while going about their merry chores in a manner somewhat in keeping with the rhythm of the classic tune “Deck the Halls.” (In fact, a flock of sheep are shown holding song sheets for it.) As might be expected with these particular celebrants, some of the familiar lyrics are altered just a bit; for instance, “boughs of holly” is “translated” as “cows and holly.” Adult readers expecting the rhythm here to work exactly as it does in the original will be disappointed, because it doesn’t—it’s clunky. This is merely a brief, lightweight spoof of the familiar ditty, so it’s recommended that grown-ups read rather than sing this—except for that final line!—to very young targeted audiences, who may be unfamiliar with the actual song anyway. Some fun is still to be had in the illustrations, however. The spirited, wittily expressive animal characters are depicted having a fine time romping about and producing a variety of onomatopoeic sounds throughout. (This book was reviewed digitally.)

Cute and sprightly but not a standout.