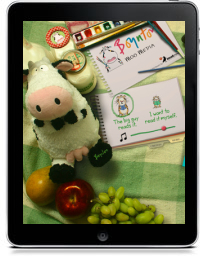 From the Boynton Moo Media series

The iPad adaption of Boynton’s bestselling board book surveys animals and the sounds they make.

When anyone attempts to enhance and reformat a book that’s already sold more than five million copies, there’s some risk involved. What if it doesn’t translate well? Worse yet, what if it flops? Fortunately, Loud Crow Interactive and Boynton don’t have to worry about that. There’s no hint of a sophomore slump in this second installment of the Boynton Moo Media series. Much like its predecessor, The Going to Bed Book (2011), this app adapts the illustrator’s trademark creatures for iPad in a way few other developers can. The animals are fluid and pliable, which is no small feat given that they’re on a flat display. Readers can jiggle them, hurl them off screen, elicit animal sounds and in some cases make them sing (in a perfect inverted triad!). Melodic violin music accompanies the entire story, which is deftly narrated by Boynton’s son, Keith. In addition to the author’s simple yet charming prose there are little surprises sprinkled throughout that extend the wit that’s won countless babies and parents over in paper form.