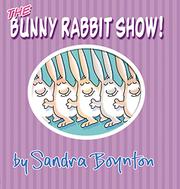 The bunnies that inhabit Boynton’s colorful world put on a musical show for the other animals.

The rabbits have taken over the theater. They dance and sing, bragging about their long ears and twitchy noses for the pigs and chickens in the audience. The rhythmic chorus—“We are ten terrific rabbits and we like to dance and sing. / Ten terrific rabbits. We can do almost anything”—is mighty infectious. The author’s trademark wit and humor are on full display as the other animals dress up like bunnies and join the massive grand finale. The barnyard cast forms a musical troupe that amuses and delights. Adults will appreciate the clever sight gags, and small children will appreciate the tasteful boasting and empowering jingle. While it’s not as complete a vehicle for inculcating emergent language skills as many of Boynton’s other books, there’s no denying it’s got verve.

A swell read for the lighthearted. (Board book. 1-3)