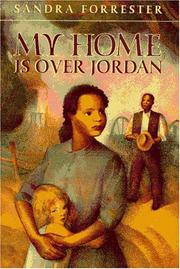 MY HOME IS OVER JORDAN

A sequel to Sound the Jubilee (1995, not reviewed) that does not stand on its own, but which will be welcomed by readers of the first book. With the Civil War over, Maddie Henry and her family are free and hope to work their own land. But the small town of Willoughby, North Carolina, where they settle, is not exactly welcoming, and some of the young black men seem as determined to stir up trouble as the belligerent whites are. All Maddie wants is to continue her education, but she is tied down by Tibby, a mixed-race child whom she finds running wild in the woods, and to whom she becomes a sort of mother. Forrester assumes a knowledge of the characters and their relationships, and jumps right into the story without much explanation; still, readers of the earlier book will appreciate the author's willingness to allow for moral complexity: While some of the characters are either all good or all bad, neither blacks nor whites as a group are, and in the rebuilding of the South, there is blame and praise enough to go around. (Fiction. 10-14)