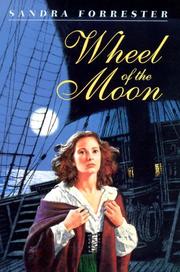 WHEEL OF THE MOON

An orphan loses one home and travels far before finding another in this bustling tale, set in 17th-century England and America. Her father dead for years and her mother suddenly drowned in a spring flood, Pen joins a group of orphans hiding out in the cellar of an abandoned London house. Barely has she become attached to the children before a gang of anything-but-ethereal “spirits” seizes them, throws them into Bridewell prison, then months later bundles them aboard a ship bound for Jamestown as indentured laborers. Though filthy conditions, bad food, and general mistreatment have taken a grim toll by the time they arrive, Forrester lightens the atmosphere by having Jamestown turn out to be far less hellish than the children had been led to expect. In fact, Pen finds herself working for such a kindly couple that, when a chance comes to escape a year later, she opts to stay. Forrester (Dust From Old Bones, 1999, etc.) gives Pen’s experiences a historical basis by noting that in 1627 alone more than 1,400 English children were shipped off to Virginia. Readers will appreciate Pen’s resilience in the face of one terrible loss after another, and will applaud her steady courage. (Fiction. 11-13)