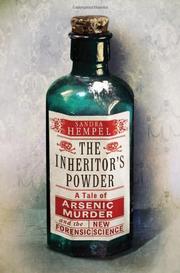 A suspicious death in a quaint English village sets the stage for a real-life scientific thriller.

Medical journalist Hempel (The Strange Case of the Broad Street Pump: John Snow and the Mystery of Cholera, 2007) examines a headline-grabbing murder case from 1833. The eccentric cast of characters includes an elderly farmer who had amassed a sizable fortune, his contentious heirs, local law enforcement, medical professionals and scientific experts. When George Bodle died from a violent stomach disorder, which also afflicted other members of the household to a lesser degree, arsenic poisoning was immediately suspected. As a white powder, it was “tasteless, odourless…easily dissolved…fatal in tiny doses” and readily available as a pest killer and for skin ailments. Textbooks on toxicology were available to medical and legal professionals, but they had a difficult time distinguishing death by arsenic poisoning from death by natural causes. Moreover, food poisoning was rampant. The symptoms were similar, and chemical tests for the presence of arsenic were primitive. Evidence gathering was left to parish constables who were notorious for drunken incompetence. In this instance, circumstantial evidence suggested that arsenic had been mixed into Bodle’s coffee. This case became a landmark in medical jurisprudence when the doctor in the case, believing the death to be suspicious, had the victim's vomit collected for analysis. Police were also on the lookout for packets of arsenic, which were ultimately discovered in the possession of Bodle's grandson, John, who was arrested and subsequently tried. An inquest was held after a post-mortem examination of the body. James Marsh, an assistant to Michael Faraday, was called in as an expert witness, and he testified to the probable presence of arsenic in the remains. The author calls the test for arsenic that he developed “the first major advance in modern chemical toxicology.”

An unexpected verdict and its aftermath make this a satisfying murder mystery in the grand tradition.

FARADAY, MAXWELL, AND THE ELECTROMAGNETIC FIELD
by Nancy Forbes
Indie

THE REAL WORLD OF SHERLOCK HOLMES
by Peter Costello
Nonfiction