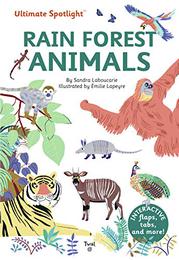 From the Ultimate Spotlight series

by Sandra Laboucarie ; illustrated by Emilie Lapeyre ; translated by Wendeline A. Hardenberg

From France, a teeming gallery of wild creatures posing in plain sight or hiding beneath flaps.

Two young human guides on the title page, one brown-skinned, one pink, beckon little explorers to open up a succession of spreads with varied effects. It begins with a big 3-D panorama of rainforest layers from understory to emergent layer and goes on to present dozens of creatures blending in to their densely leafed surroundings, hanging out in family groups, gliding through the air, and, finally, at rest in daylight and—beneath a double gatefold—at night. None of the flora is identified, but nearly every animal comes with a label, usually in boldface, and many with a basic descriptive or behavioral fact or observation: “The vine snake is very thin. It looks just like…a vine!” Some tropical settings are specified, but others are left generic. Though it’s startling on one page to see a rhino and an orangutan seemingly about the same size, however, the ensembles of flat but generally accurately detailed animals in each scene are consistently drawn from at least the same geographical region. For more hands-on learners, two pop-ups, a pull-tab, a big spinner, and lots of small flaps that are often pleasantly challenging to spot amid the busy backgrounds offer plenty of engagement.

A fact-packed venture into one of nature’s busier biomes.