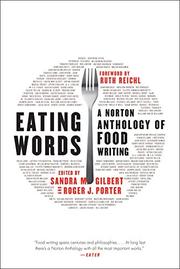 A Norton Anthology of Food Writing

A literary feast for foodies.

In this encyclopedic contribution to the burgeoning field of food studies, poet and literary scholar Gilbert (Emerita, English/Univ. of California, Davis; The Culinary Imagination: From Myth to Modernity, 2014, etc.) and restaurant critic Porter (English/Reed Coll.; Bureau of Missing Persons: Writing the Secret Lives of Fathers, 2011, etc.) bring together pieces by nearly 100 writers: poets, novelists, essayists, cooks, diners, and food critics. The population is diverse and the entries often witty, lively, and entertaining. Anton Chekhov, Seamus Heaney, and M.F.K. Fisher reflect on oysters; Louisa May Alcott, on the doomed project of Fruitlands, a utopian community whose founders—including her father—knew nothing about planting or harvesting and nearly starved themselves and their families. Proust recalls the madeleine; William Carlos Williams exults on plums; Calvin Trillin recounts his effort to lure his daughter from California to New York by promising her pumpernickel bagels. Restaurant critic Ruth Reichl (who also contributes the preface) calls her mother “The Queen of Mold” because she thought nothing about serving spoiled food to her family and guests. Erica Jong offers a sensuous meditation on the onion, and food writer Jeffrey Steingarten reveals his efforts to overcome his many food phobias, including kimchi, clams, and anything blue. One section focuses on the connection of food to identity, family, and ethnicity, with contributions from Ntozake Shange, Henry Louis Gates Jr., Maxine Hong Kingston, and Jhumpa Lahiri, among others. “Food Politics” includes entries by environmentalists Gary Snyder, Wendell Berry, and Barbara Kingsolver. Vegetarians defend their choices, as do carnivores and omnivores, and there are several exposés of bad practices (Upton Sinclair, Eric Schlosser). As in all Norton anthologies, entries are short, many edited from longer works; all have informative headnotes, and each section contains an introduction.

Useful as a textbook, the volume is a rewarding read for anyone who eats, cooks, or muses about food.