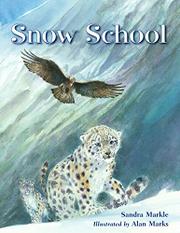 Over the course of the year, a pair of snow leopard cubs learn all they can from their mother, becoming ready for independence.

Starting right after birth, these feline siblings learn about the world from their attentive mother, especially about hunting. From the first, the kittens learn the rules their mother teaches them: It’s a dangerous world, leave a scent, be quiet and quick while hunting, guard your food, find shelter in a storm and stay clear of humans. The blood of the hunt is neither sensationalized nor minimized. Facts about snow leopards are interwoven through the story, and the illustrations help explain more esoteric animal words like markhor, ibex and pika. Pakistan’s Hindu Kush Mountains are depicted in all their drama, bathed in watercolors of blue and white, from a number of points of view. The animals are rarely shown at rest—always moving to build up their muscles and learn the skills they need to live on their own. It is a temptation to anthropomorphize these felines, but Markle tells their story for the younger reader in a way that allows them to identify with their mutual paths to independence without overdoing that connection.

Little human cubs will want to roll and cavort like these snow leopards—and learn more about them.