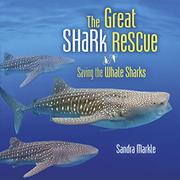 The largest fish in the ocean, whale sharks are threatened by commercial fishing, climate change, and lack of scientific knowledge.

Once again, Markle (The Great Rhino Rescue, 2018, etc.) ably introduces a vanishing species to her wide audience. She grabs their attention with a suspenseful opening: Two not-yet-grown sharks (16 and 22 feet long) are accidentally trapped by the purse seine of a commercial fishing boat. Before she relieves readers with an account of their rescue, she has introduced the species, described their “oceans of problems,” and explained the tools scientists have developed to investigate their “mysterious life.” Strictly speaking, this is less about that rescue and more about the developing research that may save the species, listed as endangered in 2016, but Markle and her publisher may be forgiven the title which sets this solidly in her Science Discoveries series. As in previous entries, her clear and well-organized exposition is supported by lively design, diagrams, maps, and eye-catching photographs, including one of the trapped juveniles. Short stand-alone sections compare whale sharks to humpback whales, describe the shark’s filter feeding, and explain how researchers identify individual sharks by their patterns of spots and stripes. Finally, she notes that great white sharks need our help, too, concluding with some words about her research and a few additional facts.

Another wonder of the animal world, adeptly displayed.