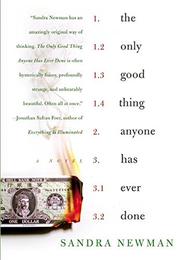 THE ONLY GOOD THING ANYONE HAS EVER DONE

Written and laid out as if its relentlessly disaffected author were unable to switch off the outlining mechanism in her word-processing software (and who among us has not suffered that terror?), Newman’s supermodern tale of Chrysalis Moffat, Guatemala-born and southern-California reared, her hopelessly drug-, love-, and booze-wrecked brother Eddie, a.k.a. Jack, and Ralph, Eddie’s Tibetan Buddhism savvy English potter chum clicks restlessly back and forth through their appalling histories as they huddle in the mouldering mansion bequeathed Eddie by their late mum. As we join them, Chrysalis is in the throes of near-fatal depression, hunkered under her bed, assailed by random memories of her booze-soaked mother and her long-dead John Wayne look-alike father, a scientist for the CIA who brought her back as a toddler from one of his missions in Central America. Short and dark in the Mayan fashion, Chrysalis, though intelligent, never really fit into California life, and neither of the children was enough to jerk their mother out of her dependencies on chemicals or lust for the broad-shouldered father. Eddie arrives, Ralph in tow, as Chrysalis is close to death by starvation and looniness. Eddie is full of a plan to turn the mansion into a profitable school of Buddhist life management, a reasonable business plan for that part of the country. Chrysalis immediately swoons over Ralph, the relatively levelheaded son of a Romany prostitute whose addictions at one point took her to the Himalayas, where Ralph, amazingly engineered for survival, picked up fluent Tibetan. As the meditation center comes into shaky existence, the three lives are reviewed in flashback, revealing coincidental connections among their various parents and siblings, and the truth of Chrysalis’ actual parentage and the horrifying truth of her orphanage is revealed. Oh, and considerable useful information about the percentages of blackjack is shuffled in.

For young hipsters who can’t be bothered with coherence.