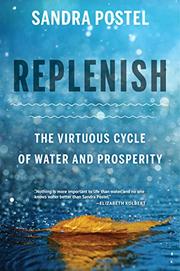 The Virtuous Cycle of Water and Prosperity

Why well-functioning natural ecosystems—“watersheds, wetlands, floodplains, and river systems”—play as important a role in our economic infrastructure as dams, canals, and water treatment plants.

While recognizing the benefits of “large-scale water engineering” projects that support an increasing population at a higher standard of living, Global Water Policy Project director Postel (Pillar of Sand: Can the Irrigation Miracle Last?, 1999, etc.) questions whether this dependence on man-made structures is sustainable. Over the past two centuries, argues the author, the massive benefits have tended to overshadow hidden costs such as the depletion of groundwater and unsustainable water use. “As long as progress was measured by the growth in populations served, hectares irrigated, and kilowatt-house generated,” she writes, “the construction of big dams, canals, turbines, and pumps was deemed to serve humanity well.” We have substituted filtration plants for wetlands, which provided purification by natural filtration, in order to supply water to support farms and urban development. Another important concern is the extent to which we are depleting groundwater for irrigation. Postel cites a particularly alarming example: the Chinese irrigation project involving the transfer of “a volume of water equal to the yearly flow of the Nile River” from the Yangtze River, at an estimated cost of $60 billion, without regard to the ecological and social disruptions involved. Nevertheless, the author is optimistic about a shift away from a narrow, utilitarian view of water to a recognition that it is “the planet’s greatest gift.” She is discovering a growing appreciation for the important role of natural ecosystems; hopefully, she writes, the efforts to recharge groundwater in California—and other Western states—by replenishing aquifers will succeed in alleviating the immediate threat of drought and provide a model for future water management.

An informative, purposeful argument about why we must accept the moral as well as practical responsibility of water stewardship.