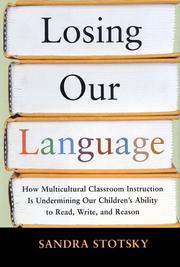 How Multicultural Classroom Instruction Is Undermining Our Children's Ability to Read, Write, and Reason

Stotsky, a Harvard Graduate School of Education research associate, shares familiar worries about the alleged sins of the multiculturalists— —illiberal” and anti-intellectual practices—their “watering down” of the curriculum and “dumbing down” of pedagogy. Multiculturalists, as the author observes, claim to introduce non-Western, ethnic, and gender-sensitive literature in order to promote “authentic” experience. Originally, this was intended to correct longstanding sociopolitical exclusions (and academic deficiencies) and to motivate minority children. As a result, the —whole-language— movement (a context- and culture-based reading program) became multiculturalisms— most prized theory. Phonics-based reading (instruction based on recognizing sound-letter relationships) was pushed aside, and “advanced— vocabularies were replaced with dialects (Black English, Spanglish). Much (to some, excessive) emphasis was given to the literature of minority groups, with relatively scant attention paid to the majority European ethnic tradition. Stotsky complains that traditional basal readers have lost their literary standards and no longer reflect the rigor of textbooks containing the “best literature” available. The outcome, according to the National Assessment of Educational Progress, has been a steady downward trend in the basic skills, knowledge, and analytical powers of students and a widening gap between white and minority children. Some of the author’s views contrast starkly with those of researchers who maintain that linguistically and culturally enriched backgrounds are effective in enhancing academic and social skills. The new crop of realistic multiculturalists, such as Jabari Mahiri (author of the recent Shooting for Excellence: African American and Youth Culture in New Century Schools), maintain that to filter cultural and linguistic backgrounds out of the curriculum would be tantamount to denying children’s identity and reality. Anti-multiculturalists like E.D. Hirsch and the late Allan Bloom created a debate that has lasted since 1987. Stotsky will perhaps ride its wave—and produce a splash of her own.