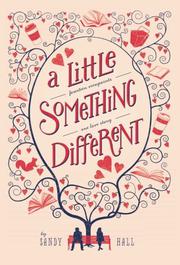 A LITTLE SOMETHING DIFFERENT

Hall’s debut is the inaugural release from Swoon Reads, a crowdsourced imprint of Macmillan.

Lea likes Gabe, and Gabe likes Lea, and everyone, including their matchmaking creative-writing professor, a bench on the green and a campus squirrel, wants them to be together. Sounds like a simple love story, but with 14 points of view, it’s anything but. Rather than a little something different, readers are handed a confusing train wreck populated by one-dimensional characters and indistinguishable voices (save the acorn-loving squirrel). Although the narrator of each section is clearly marked, change from one viewpoint to the next knocks readers clear off the page, and disappointingly, none of the dozen-plus voices are those of the would-be lovebirds. Gabe is pathologically shy, but he comes off as pathetically broody, and Lea’s wishy-washy attitude toward him is frustrating. The inclusion of several gay characters and the casual mention of Lea’s Chinese heritage feel forced, and the normalizing use of the phrase “skank queen” to describe the girl her friends view as Lea’s competition for Gabe’s affection is unpleasant. It’s not clear who the intended audience is, as the story is more playground drama than collegiate romance. Readers who live for fun and quirky love stories won’t find one here.

A little something puerile, amateurish and flat.