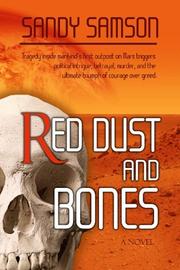 In Samson’s sci-fi thriller (Demon’s Redemption, 2009), a crew sent on a rescue mission to Mars battles what might be a flesh-eating alien life form, sabotage and a murderer aboard their ship.

Col. John Hellman leads the Planetary Exploration Command on its way to the red planet to learn what became of the last six-person crew. On Mars, the members discover skeletal remains and crystal rods like the ones brought back from an earlier mission, which are now being examined on Earth by John’s wife, Marie, director of PEC’s Extra-Terrestrial Biology division. Believing the rods may be responsible for the piles of bones, John fears for Marie’s safety, but first, he must contend with someone sending encrypted messages to his crew and their being attacked. Though sci-fi, the novel concentrates mostly on the mystery behind murders occurring on both Earth and Mars. Suspense deftly builds from the start, when John’s friend Tom tells him PEC speculates that an infection killed the missing crew—which would explain why a doctor, Sarah Carpenter, has been appointed the mission’s commander. Also, rather than the crew calmly waking up from stasis on Mars, tension is further established by someone having a heart attack after hypersleep and the area being scanned for signs of life before anyone even steps foot on the planet. Survivors of the previous mission tell of the crew’s demise—possibly related to aliens—but the tensest moments take place after one of John’s crew is bludgeoned to death and another has his throat slashed. Distrust boils among the crew while accusations and theories abound; as psychologist Cynthia proclaims, “[T]rust is always a gamble.” Back on Earth, Marie can’t escape the paranoia. PEC believes she’s in cahoots with a saboteur among John’s crew, and when a trusted colleague dies, she blames her employers. Although the couple’s interplanetary stories receive equal coverage, John’s account is the more exhilarating of the two, especially for its Mars locale. Samson’s novel includes subtle, wry nods to other sci-fi works—the mission has shades of both Alien and Aliens—and Star Trek fans will appreciate a familiar refrain, with variations voiced by more than one character: “I’m a scientist, not a politician.”

Shines brightest as a thriller but basks gloriously in its dusty, red-planet ambiance.

AND THEN THERE WERE NONE
by Agatha Christie
Newsletter sign-up