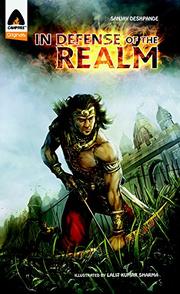 IN DEFENSE OF THE REALM

From the Campfire Classics series

An info-comic wrapped in a sketchy, overloaded plotline, this historical tale chronicles a fictional clash between the ancient Indus Valley kingdoms and an invading army of Akkadians.

Pausing for frequent but largely speculative infodumps about a civilization that remains almost entirely unknown, the author, an archeologist, sends the modern-sounding prince (“Oh! I so wish I was down there”) of a besieged city and his pedantic mentor on a tour. They go to neighboring Mohenjo-Daro and then Harappa, both to gather an army of allies and to marvel at the “very efficient system of regulations,” the public hot baths (“Another miracle of systematic construction”) and civic organization (“I have heard it is divided into three parts—a citadel and two large population centers”). Sharma leaves plenty of skin exposed as the buff, shirtless prince battles a leering traitor and then, with help from a bangle-laden dancing girl (who happens to resemble the prince’s lissome but warlike betrothed), contrives to ambush the Akkadian general. Still, readers are unlikely to care much about the characters, the setting or the clumsily expressed theme that “tact can win kingdoms without much loss of blood.” A closing spread of information about the mysterious Indus Valley ancients veers off into a discussion of the Rosetta Stone.

Despite occasional action sequences and all the skin, readers will be yawning.