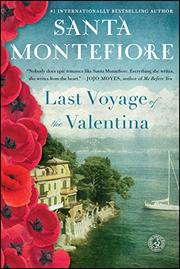 LAST VOYAGE OF THE VALENTINA

Popular British novelist Montefiore, a media glam girl who hangs with the likes of Prince Charles, enters the U.S. market with a murder-romance that travels between swinging 1970s London and WWII Italy.

Strikingly beautiful half-Italian Alba has always felt herself an outsider and resented her wealthy, conventional father Thomas and stepmother Margo. At 26, Alba lives in London on her father’s houseboat, the Valentina, and keeps herself occupied with sex and shopping. One day she finds a rolled-up portrait of her mother, Valentina, who died shortly after her birth and is never mentioned by her father (other than in the naming of his boat). Novelist neighbor Viv suggests that Alba enlist Viv’s attractive agent Fitz to pretend to be her boyfriend in order to help discover what secrets about Valentina her father is hiding. The ruse works. Plus, Fitz and Alba fall in love, but he wisely tells her she must go to Italy alone to find her roots. Once there, Alba quickly finds herself reevaluating her identity. In her mother’s village, she meets her family and slowly uncovers the secrets of Valentina’s death. Meanwhile, the portrait of his dead love has caused Thomas to remember their tragic affair, carrying readers back with him to WWII. Captain of a motor torpedo boat, Thomas stopped briefly in Valentina’s war-ravaged village and promptly fell in love with her. He promised to return after learning Valentina was pregnant, and he kept his word, but she was murdered on the eve of their wedding. Gradually Alba realizes that her father was protecting her from unpleasant truths about her duplicitous mother. She returns to England planning to marry Fitz but finds it hard to resist the pull of Italy.