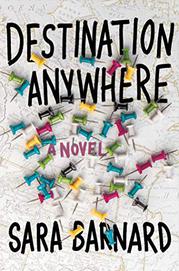 After a traumatic incident, an aspiring artist flees from England to Canada.

Peyton King is on a plane to Vancouver without a plan. The 17-year-old Brit has had a year that started out promisingly enough—a new school offers a fresh start after 5 years of bullying and brings, for the first time in her life, a group of friends and a boyfriend—then slowly but surely ended in chaos. Leaving only a short note for her parents, Peyton flees halfway across the world and shortly thereafter connects with a motley crew of 20-something travelers from various parts of Europe. As the group takes a road trip through Canada in an RV they dub Justin, Peyton documents the journey in her beloved sketchbook—and contemplates kissing her adorable fellow explorer Beasey. She also slowly regains the trust in other people that she’d lost. The story alternates chapters between Peyton’s past and present, slowly leading up to the tragic event that prompted her flight. Barnard has crafted a page-turner that’s both adventurous and reflective, and Peyton is a thoughtful, nuanced heroine who eventually understands her past roles as both victim and enabler. Excepting Scottish traveling companion Khalil, whose name cues him as a person of color, main characters are presumed White. There is some diversity in sexual orientation. Illustrations not seen.