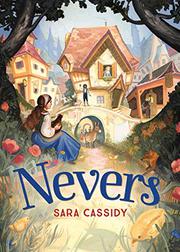 In the chaotic countryside of post-Revolutionary France, Odette and her flighty mother, always on the move, try to make a home in the town of Nevers.

Fourteen-year-old Odette’s always had to care for her mother, Anneline, who is gorgeous, selfish, and accident prone. When people in Anneline’s vicinity (usually one of the many husbands she’s had) end up dead, it always is, truly, completely by chance. Yet after each such incident, Anneline and Odette take to the roads seeking safety. In Nevers, Odette scrubs and gardens, cooks and schemes, crossing her fingers that maybe this time they’ll find stability. Though she keeps to herself, Odette’s drawn to the fascinating sights of Nevers, and readers will be as well. There’s M. Mains, a former scholar who smells people’s hands to learn about them, Mme. Genevieve the inventor, and M. Gustave, their landlord, who secretly wishes he were a chicken. There’s a piglet and a new-hatched chick who are BFFs and a donkey who brays in Latin that only Odette hears. And best of all, there’s Nicois, who rapidly becomes like the brother she’s never had. Together, dark-skinned Nicois and light-skinned Odette try to solve a puzzle that might connect Odette’s history to secrets here in Nevers. Gay and intersex representation fits smoothly into the historical setting, meshing neatly and naturally with these charmingly odd characters living their everyday lives in the aftermath of massive social upheaval.

This brief sojourn in an alternative 18th-century France is an unexpectedly rich one.