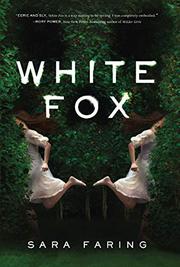 Eighteen-year-old Manon and 17-year-old Thaïs have lived with their aunt in New York City ever since, and their father’s death the previous summer still stings. Tai is puckish and effervescent, with “beautiful gemstones of stories that she’s sharpened to points” and musical laughter that hides deep insecurity. Noni, on the other hand, is a bookish and unabashedly melancholy young woman. When they get an invitation to return to Viloxin, the “Eden” of their childhood, as guests of honor at a retrospective of their mother’s work, they can’t pass it up. Soon after their arrival, Tai discovers White Fox, a legendary unfinished script penned by her mother. The screenplay, which is nestled in between Tai’s and Manon’s narratives as well as that of Boy, a darkly mysterious third narrator, may hold the key to Mireille’s fate. Desperate for the truth, Tai and Noni are enticed into an eerie and darkly seductive puzzle box of enigmatic clues, revelations, and danger. Faring, an imaginative, tactile, and immensely quotable wordsmith, explores the complexities of sisterhood and grief with a deft hand, and her unusual island setting, with its futuristic touches, draws readers in with a sensuous warmth that belies the sharp teeth beneath its surface. Most main characters seem to be White.