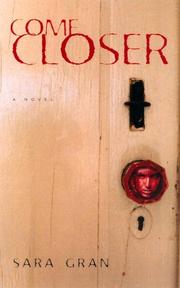 In a decidedly creepy departure from her debut (Saturn’s Return to New York, 2001: a charmer about mothers and daughters in literary New York), Gran tells of a young woman possessed by a demon.

Amanda narrates as she describes her own frightening decline from a young, happily married architect to a woman she barely recognizes, possessed by the ancient demon Naamah. It begins imperceptibly at first—strange tapping sounds in her loft, increasing discord between her and husband Ed, her taking up cigarettes—but all these things are explained away by common sense: the loft is old and squeaks, she and Ed need more quality time together, stress at work has drawn her back to a bad habit. Perfectly reasonable, but in retrospect Amanda sees these inconsequential changes as signs of the demon taking hold of her. She dreams of Naamah: she and the demon wade in a sea of blood, Naamah, with beautiful black hair and pointy teeth, promises that she will always love Amanda and never leave. Early on, Amanda mail-orders a book on architecture, but instead she’s sent a volume on demon possession. As the months progress, she is able to answer yes to nearly all of the questions under the heading “Are You Possessed by a Demon?” She begins seducing rough men, stealing, lying, almost drowns a child while on holiday, and then commits murder. But instead of taking a more conventional route—like turning to the law—Gran smartly puts the focus inward. For Amanda, the loss of herself, in both body and mind, is far worse than the committing of these horrible crimes. She seeks help, but her doctor and psychiatrist seem to be demons themselves and Amanda begins to see demons everywhere. The tale, fast-paced and claustrophobic, raises a frightening question: Amanda could be going insane, but, in the final analysis, what’s the difference?