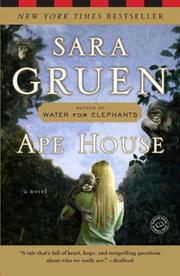 In this novel about a researcher’s devotion to a family of bonobo apes, the author of Water for Elephants (2006) turns her attention to another mistreated mammal whose intellectual capacity has been undervalued by humans.

Aspergerish Isabel Duncan has found joy studying the advanced language development of bonobo apes that have been raised to communicate in English and sign language. At the research lab where she works, the bonobos—matriarch Bonzi, outgoing Sam, adolescent Jelani, pregnant Makena, sensitive male Mbongo and baby Lola—are treated with respect and love, but animal-rights activists constantly protest the facility. Shortly after Philadelphia Inquirer reporter John Thigpen interviews Isabel, watches her play with the bonobos as an equal and experiences one-on-one communication with Bonzi, the Language Lab is bombed by masked intruders, and the Earth Liberation League, an animal-rights extremist group, claims responsibility. Isabel is seriously wounded. The apes are not physically hurt, but the university funding Isabel’s research quickly sells them to a secret buyer to avoid further problems. Isabel’s fiancé and boss Dr. Peter Benton’s nonchalance horrifies her, and she throws him out even before she finds out he’s slept with her assistant. (Gruen conveys to the reader loud and clear early on that Benton is a baddy.) The apes have ended up in New Mexico starring in a hit reality show produced by a porno magnate that emphasizes their sex lives over their language skills. Isabel vows to save the bonobos even if it means working with former enemies. Meanwhile John is fired from the Inquirer and moves to Los Angeles when his wife, a discouraged novelist, gets a TV job. When a sleazy tabloid hires John to check out the reality show in New Mexico, he and Isabel work separately and together to save the bonobos.

The factual information Gruen presents about bonobos and their language acquisition is compelling; unfortunately, the humans, who get far more page space, are a drag.