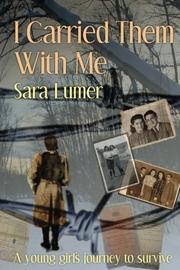 I CARRIED THEM WITH ME

A Young Girl's Journey to Survive

A debut author recounts her experiences before and during the Holocaust.

Born in the eastern Czechoslovakian town of Sekernice to a family of religious Jews, Lumer had a traditional upbringing in a time and place with few amenities. She was responsible for working at her parents’ store, caring for her younger siblings, and praying every day: “I had no idea what I was saying, but I knew it was very important, because if I didn’t say that prayer every morning, there was a very good chance I would get punished by God.” The first section of the book comprises anecdotes about growing up in Sekernice, a multilingual town in the Carpathian Mountains home to various ethnic groups and religious traditions. The second section follows Lumer’s life after her relocation in 1943 to Budapest, where her parents sent her at the age of 15 in hopes that she would be safe there with her older brothers for the duration of World War II. The following spring, Germany invaded Hungary and began deporting its Jews to concentration camps. Lumer’s wartime experiences included multiple camps and forced marches in dire conditions, though she somehow found the will—and luck—to remain alive despite all that the world threw at her. The author, as the introduction reveals, wrote this book with the editing help of Joe Lumer, her son; it is dedicated to his memory. She tells her story in simple, declarative prose, with little commentary beyond the bare facts and emotions of each experience. “The guards kept telling us it was only a little longer, only a little farther, and we would arrive,” she writes of one march. “I fell again and couldn’t get up, so I started crawling on all fours, like a dog.” She resists offering easy explanations of the conflict and the genocide, or what both might portend for the future, simply repeating her remembrances and allowing them to weigh on readers. This gives the earlier episodes, like the one involving Lumer carrying a live chicken in a sack to the shochet (slaughter), an almost folkloric quality. The later recollections vividly reveal the horrific absurdity of war.

A simple, disciplined, and affecting addition to the genre of Holocaust memoirs.