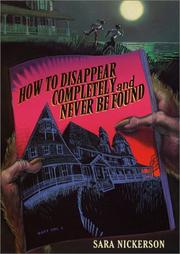 HOW TO DISAPPEAR COMPLETELY AND NEVER BE FOUND

In this spookily surreal adventure yarn with a cherry-on-top ending, two oddball loners on separate quests team up to solve a mystery embedded in the past. Ever since her father drowned four years ago, Margaret, now 12, has longed for information about his death. But her uncommunicative, deeply depressed mother refuses to discuss it, and Margaret’s curiosity remains unsated. This all changes when, on a journey to the decrepit island house her father grew up in, she finds a package addressed to her mother but returned unopened. Inside is the first volume of a handwritten comic book titled Ratt, as well as her father’s swimming medal and a key. Convinced that the package is somehow related to the mystery of her father’s death, Margaret journeys to the seemingly abandoned house to investigate, and the plot, which had been slowly heating up, finally begins to cook. On the island, Margaret gets involved with Boyd, a friendless outcast who gains hope and heart from “the wonderful, terrible and truly amazing world of the Ratt,” now a multi-volume saga that chronicles the exploits of its strange hero, a “half man, half rodent who called himself Ratt.” In the eerie and unexpectedly hair-raising adventure that follows, Margaret and Boyd learn how Margaret’s father died and discover the surprising identity of the Ratt. There’s a lot going on in this multifaceted novel, and some of it is impossible to buy, even within the story’s otherworldly comic book–like perimeters. Still, engrossing, thematically rich, and atmospheric. (Fiction. 10-14)