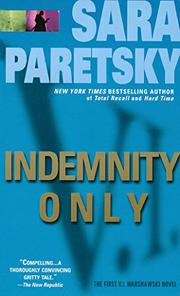 In Lamaar Ransome, Private Eye (p. 462), David Galloway played the idea of a super-hard-boiled female shamus strictly for laughs—not very successfully. Here, however, with narrator-sleuth V. I. (Victoria) Warshawski of Chicago, first-novelist Paretsky is doing the same thing with an absolutely straight face; and the result, if rather flat, is a sturdily readable diversion that's no more implausible than any other hard-boiled fare. The case begins when V.I. is hired by banker John Thayer (or so he identifies himself) to locate Anita, the missing girlfriend of his son Peter. But when V.I. then promptly discovers Peter's murdered body, the plot thickens: her client, it seems, was really Anita's father, a shady labor leader; and Peter was working for the Ajax Insurance Co.—which may have had illegal connections with the labor leader and with some mobster types (who rough V.I. up). Then Peter's father (the real John Thayer) is also murdered, so the insurance/bank/union/mob tangle gets more complicated. And before V.I. exposes a convincing insurance scare, she finds the missing Anita and plays godmother to Peter Thayer's unhappy teenage sister. Predictably plotted, but written with agreeable plainness—and, except for V.I.'s affair with a suspect (is he just another "pretty face"?), the sex-role shift is handled with just the right sort of un-cute, matter-of-fact credibility.