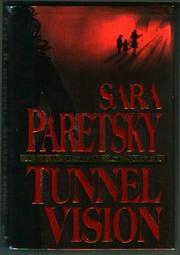 Chicago PI V.I. Warshawski (Guardian Angel, 1992, etc.) discovers frail, frightened Tamar Hawkings and her three children living in the rat-infested basement of V.I.'s soonto-be-abandoned office building. Seeking help for the family from the city's shelter organizations, V.I. comes across some odd information about a small group of women in construction trades seeking a contract to build low-cost housing. Something is going on that connects one-time radical Jasper Heccomb; Alec Gantner, a senator's son whose family has megaholdings in an agricultural concern called Gant-Ag; banker Donald Blakely; and law professor Fabian Messenger. An invitation to the Messengers' party brings V.I. into close contact with Fabian's dysfunctional family; and in the party's aftermath, wife Deirdre is found bludgeoned to death in V.I.'s office while teenaged daughter Emily has vanished with two younger brothers in tow. Chaos is furthered by flooded tunnels deep below Chicago's streets, a theatrical backdrop for V.I.'s rescue of the children, with help from valiant neighbor Contreras. The wind-up of the big scam, on Gant-Ag's airfield, is equally melodramatic, ending an overstuffed saga that's as much fun to read as your newspaper on a bad day. Strictly overkill for a heroine gone from hard-edged to hard-bitten and a creative writer on a self-indulgent rampage.