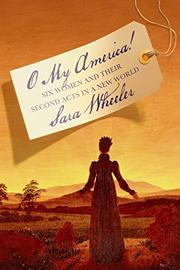 Six Women and Their Second Acts in a New World

English travel writer Wheeler (Access All Areas: Selected Writings 1990–2011, 2013, etc.) explores her personal struggle with age through the lens of American history as experienced by a group of 19th-century women.

In the introduction, the author reveals the impetus behind her choice of subject. With menopause on the horizon, she went looking for inspiration from women who traveled to America and found “second acts.” Fanny Trollope (mother of Anthony), Fanny Kemble, Harriet Martineau, Rebecca Burlend, Isabella Bird and Catherine Hubback (Jane Austen’s niece) all left Britain—some permanently and some for shorter trips—to find something in America. Some loved the United States, and some hated it, but all were changed by the experience. Those experiences make up the meat of the book, and they are worthy of chronicling. Kemble was a British actress who eventually contributed to the cause of the Union in the Civil War. Burlend conquered the harsh wilderness of Illinois with her family and left a legacy that can still be found today. The stories are at once varied and remarkably similar, and the resilience of the women is impressive. Though it is easy to see what attracted Wheeler to these women, the author occasionally veers off course into other subjects equally worthy but not entirely connected. The fate of the Native American tribes contemporary to the story is not to be ignored, but Wheeler references it in a manner that feels out of place. Sometimes, a particular invention or discovery leads Wheeler down a divergent path for a few pages; in those cases, the thread of the story is easily lost. While frequent asides about menopause and middle age personalize the author’s fascination for her subjects, they also break up the narrative.

Wheeler’s gift for biography is strong, and despite occasional wanderings from the trail, the author ably captures these women and their travels.