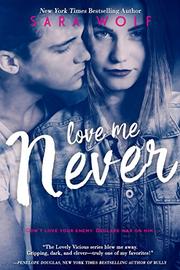 From the Lovely Vicious series, volume 1

This hilarious, dark YA novel, the first in Wolf’s (Disarranged, 2013, etc.) Lovely Vicious series, examines the difficulties of love and high school through the scornful eyes of a teenager who’s droll beyond her years.

Isis Blake is a clever, feisty, and seemingly confident teenage girl starting her senior year of high school in Northplains, Ohio, far away from her old life in Florida. She has a secret past full of bullying and heartbreak, and she’s riddled with obsessive thoughts of a boy whom she can only refer to as “Nameless.” As a result, she’s decided to swear off love for the rest of her life, declaring, “Love…is the enemy. Do not consort with the enemy.” She encounters Jack Hunter, a guy who “talks like an Einstein clone and looks like an underwear ad,” and punches him in the face at a party for insulting her new friend Kayla, who reminds her of her former self. She soon finds herself at war with Jack, nicknamed “The Ice Prince” by other teenagers who are hopelessly in love with him, and will stop at nothing to ruin his reputation as the mystifying, self-possessed Adonis of East Summit High. This YA novel is a juicy, enthralling read, driven by a devious, over-the-top war of wits between Jack and Isis. Through Isis’ first-person perspective, Wolf perfectly captures the frenzied stream of consciousness of an eccentric 17-year-old girl who aims to humiliate a boy in order to avenge the broken part of herself. However, it’s Isis’ depth that makes her a remarkable character. Her self-deprecating sense of humor and relentless one-liner retorts hide her insecurities; as the novel unfurls, so does her innermost self. Her dedication to her emotionally wounded mother is also commendable and illustrates that Isis is mature beyond her years. The mysteries surrounding her past heartbreak, Jack’s true emotions, and a disturbing revenge prank gone horribly wrong propel a narrative that’s quite difficult to put down.

A complex, witty page-turner, ideal for YA fans of scandal and romance.