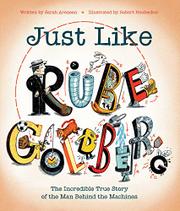 The Incredible True Story of the Man Behind the Machines

Rube Goldberg was a famous inventor who didn’t invent anything.

He was a shy and quiet kid who loved to draw and dreamed of becoming a great cartoonist. But his German-immigrant father was horrified: Artists were no better than beggars, so Rube went to Berkeley, studied engineering, and got a job with San Francisco’s Department of Water and Sewers. He hated it, quit, and followed his dream of becoming a cartoonist for a newspaper, landing a job at the New York Evening Mail. He became famous for the cartoons of elaborate inventions he created from 1912 to 1932, a new one every two weeks, some taking as long as 30 hours to draw. Front and back endpapers reproduce several of Goldberg’s black-and-white cartoons depicting zany chain reactions typical of his inventions. Neubecker’s own full-color illustrations deftly re-create the comedy of the originals, with double-page spreads dramatizing how to put holes in doughnuts, how to turn off a light, and how to cut your own hair, adding diversity that’s not seen in the originals. Goldberg appears in the illustrations as a white man; the streets of New York City are peopled with diverse citizens. Young readers will enjoy tracing the chain reactions for each invention and, in so doing, will be using “the most amazing machine in the universe: / the brain!”

An engaging volume that will encourage readers to think outside the lines.