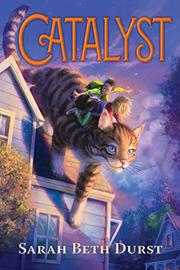 She’s just the adorablest, teeniest of stray kittens—suddenly grown as big as a hippopotamus.

Zoe’s not supposed to bring stray animals home anymore, ever since the skunk incident. Who can resist the world’s smallest kitten, though? And it’s Zoe’s 12th birthday, and she’s been unhappy at how tall she’s grown, and she’s been crushed over her older brother’s impending departure for college; eventually, her concerned parents cave. But after Pipsqueak’s been with Zoe for just a couple of days, she’s suddenly a full-grown cat. Then she’s the size of a dog, then a lion, and after less than a week, a hippo. If the government finds out about the enormous talking feline (for Pipsqueak can speak, now, and read as well), will they take her away to Area 51? Zoe and her best friend, Harrison, begin a quest: They’ll take Pipsqueak to Zoe’s wacky New Age aunt, who’ll maybe have a solution for them. Along the way their fellowship swells with magical animals, an offbeat crew composed of a six-tailed green dog and a multicolored flying mouse. The far-fetched setup and ensuing adventure convey themes that will resonate with the audience; Pipsqueak’s as unhappy with her out-of-control body and circumstances as Zoe, and the quest may lead them to new comfort with themselves. Zoe is depicted as white on the cover, and Harrison is of South Asian descent.

Magical animals become a kooky, sweet metaphor for growing up.