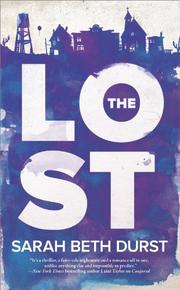 A daughter caring for her terminally ill mother must find her way out of an unusual desert town in Durst’s debut novel for adults.

Lauren Chase is resigned to a boring office job while she supports her mother, who is recovering from cancer, after abandoning her dreams of becoming an artist. When her mother relapses, Lauren hits the road to avoid hearing the prognosis. The suspense builds as she loses her wireless signal and is stranded in the aptly named town of Lost: a purgatory for lost souls, some living and some dead, who scavenge through a humorous catalog of lost items—ranging from mismatched socks to wasted water—to find the missing item they need to move on. Similar to the Nothing that destroys Fantasiana in Michael Ende’s The Neverending Story, the post-apocalyptic wasteland of Lost is surrounded by a roving dust storm that consumes anyone who dares enter it with the wrong attitude. After she's plucked from the dust by the Finder—a tattooed, supernatural being named Peter whom she develops a crush on—Lauren learns that the only way to return to the real world is to talk to a mysterious figure called the Missing Man. Unfortunately, the Missing Man takes one look at Lauren and runs away, forcing her into hiding—along with Peter and an abandoned child named Claire—with an angry mob in close pursuit. Her subsequent attempts to repel the villagers with booby traps bring levity to a grim situation. While she scavenges for clothing and food, Lauren rediscovers her forgotten interests, like her love for art and for the ocean, as she finds the courage to face her mother’s impending death. Adding to the tension is the fact that Peter doesn’t want Lauren to leave, and the longer she stays in town, the more attached she is to her new friends. Readers may be similarly torn between an appropriate ending for Lauren (returning home to deal with her mother) and the alternative (staying in Lost with Peter and Claire). Fortunately, the author will continue to explore the world of Lost in a sequel.

This exuberant fantasy is finely crafted, filled with humor and very moving.